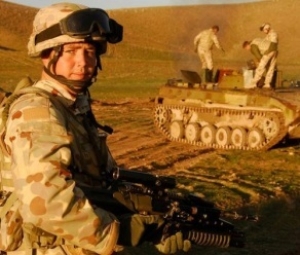 A device used by Australian  soldiers in Afghanistan to jam the detonation of roadside bombs has been linked to a cluster of cancer among returning Diggers, with  internal documents revealing the Federal Government was aware of alleged problems as early as 2008.

The Government's claim last month it was not aware of multiple cases where the battlefield device allegedly caused cancer has been exposed as false by the grieving widow of an Australian soldier.

The revelation has reignited a call from the Australian Medical Association for an investigation  into the link between the device and what it believes constitutes a cancer cluster, and comes after Skye Butler provided The Weekend West with documents her husband Sapper Luke Butler sent to Veterans' Affairs in 2008.

Obtained under Freedom of  Information laws, the documents show Spr Butler claimed the bomb-jamming equipment he used in Afghanistan caused his brain tumour, which killed him at age 27 in 2010.

Mrs Butler released the dossier after Veterans' Affairs Minister Warren Snowdon spoke publicly in June of his "surprise" when the family of another soldier, 28-year-old Kevin Dillon, claimed his fatal cancer was caused by the electronic countermeasure device.

A lifesaving tool in a war where insurgents frequently attack using roadside bombs, the mobile version of the device can be worn on the soldier's back and uses high-power radio transmitters to disrupt mobile phone signals that detonate bombs.

At the time, Mr Snowdon said he believed Mr Dillon's case was the first where the device had been linked to cancer, and "there is no evidence I am aware of the equipment we use has given that outcome", and Veterans' Affairs had told him it had no records linking cancer with the device.

Mrs Butler's documents, held by Veterans' Affairs, showed it was aware of her husband's claim five years earlier linking the ECM to his tumour.

A board of inquiry assessing his compensation claim put in writing his assertion two soldiers he worked with in the 1st Combat  Engineer Regiment had "suffered similar conditions".

AMA president Dr Steve Hambleton revealed the group was aware of four cases where the bomb-jamming device had allegedly been linked to cancer in returned soldiers.

It is believed this makes between four and six cases where an ECM has been allegedly linked to cancer.

Mrs Butler yesterday spoke out to  question how many  cases the Government might not be admitting.

"They either haven't looked (for the records) or they're lying about it," Mrs Butler said. "It's really insulting to Luke. It's insulting to all soldiers."

Besides "high-frequency radio  exposure", the compensation claim by Spr Butler on September 1, 2008 put "exposure to foreign materials (fumes)" during his service as an  additional possible trigger that led to his malignant neoplasm.

Dr Hambleton said the ECM device worked on the microwave band, which should not be able to cause the kind of tissue heating that damages DNA. But he said nothing could be ruled out  without an investigation.

"Theoretically there is no risk," he said. "Even though there are a couple of other cases, it doesn't necessarily mean a connection. But when you see clusters, you do want to investigate."

A spokesperson for Mr Snowdon said the minister's comments in June were based on advice from the Repatriation Medical Authority and  Defence,  based on medical and scientific evidence on ECM and cancer.

In June, Rear Admiral Robyn Walker of Joint Health Command said about Mr Dillon's case: "I am not aware, at this point, of any concerns raised about ECM." She did not respond to questions yesterday but Defence maintained there "has been no evidence of cancers attributed to the frequencies and equipment we use".